Hey Vapestar! I’m Max Vape the chief reviewer and founder of this website. Great to have here! Enjoy this fine Uwell Crown Review about ONE OF THE GREATEST Sub Ohm Tanks! You can find a list of our favorite sub ohm tanks here (you’ll notice the UWELL Crown made it to a featured spot as well).

Is it worth the Hype ?

This is the leading Question for today! We have talked to almost everybody in the Vaping Community and all they say is:

„Been testing bunch of vape tank, but the Uwell Crown just blew me completely away.“

„I’ve been using the UWELL Crown for almost three weeks now: And I’m still using the SAME coil it came with.“

I guess You heard that too! But you still want to confirm, if it’s really worth the hype!

E-CigarettePROs will analyze the pros and cons –  of the product known as Crown Sub Ohm Tank – in detail. We personally bought the Uwell Crown and used it now for several month. This Uwell Crown review is entirely factual, honest and unbiased. To help you arrive at Your best decision.

This is me using the  Uwell Crown 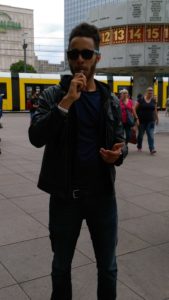 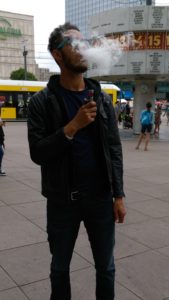 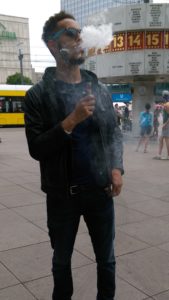 The Vapor is incredible! Just a joy to Vape! Especially on the 0.25ohm coil at 100W. Probably the best Vapor, we have experienced to this day! Incredible!

Learn about the manufacturer

The manufacturer of Uwell Crown is Shenzhen Uwell Technology Company. It is a Chinese company founded in 2015.

„Here at Uwell, we pride ourselves in knowing, that we go the extra mile to ensure customer satisfaction, when it comes to our products and customer service.“

This company is relatively a newcomer in this field. When it comes to their own designs – it can be said without an iota of doubt – that they have managed to make a long lasting impression, in the minds of e-cigarette lovers within a short period of time.

The Uwell Crown was consistently rated among the TOP sub-ohm Clearomizer, after it’s debut in 2015. Among many review sites, frequently also as the very best, in that category of tanks.

So what makes the Uwell Crown so special? E-CigarettePROs will now present you the facts…

This is Uwell Crown’s huge USP: The double-sided tank filling. You can fill it up, while it sits on the mod and also possible from bottom. This top tank filling feature makes it really easy to fill. Without worrying about juice spreading everywhere (leaking). It’s the only one out there with this feature!

+ The next point underlines, how much cash you actually save by getting this tank. (We are not trying to salesy here. It’s an argument, which was mentioned by many guys in the Vaping Community) 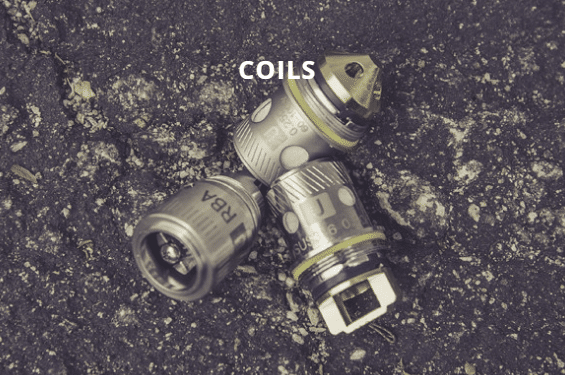 Most guys in the Vaping Community say, that the Coils is one annoying aspect of Vaping. Normally, you would have to spend a great amount of money on replacement Coils. With the Uwell Crown it’s different. Experienced Vapors claim:

„This coil is going strong even after a Month! No difference in flavor or cloud production“

Unbelievable but true. The reason for that: The coils are 100% Japanese organic cotton and wicked extremely well.

The Dual coils will work well on your higher wattage devices (80W-150W).

Uwell Crown offers fantastic flavors and clouds. Up on to this day we still use E-liquids by Vaporfi (-10% Coupon Code). The Flavor was by far the best on the 0.25ohm dual coil. The other coils were both impressive as well. Try it and you will experience a flavor you would die for!

Note: Make sure to saturate the coil nicely before vaping. Let it sit for at least 30min. 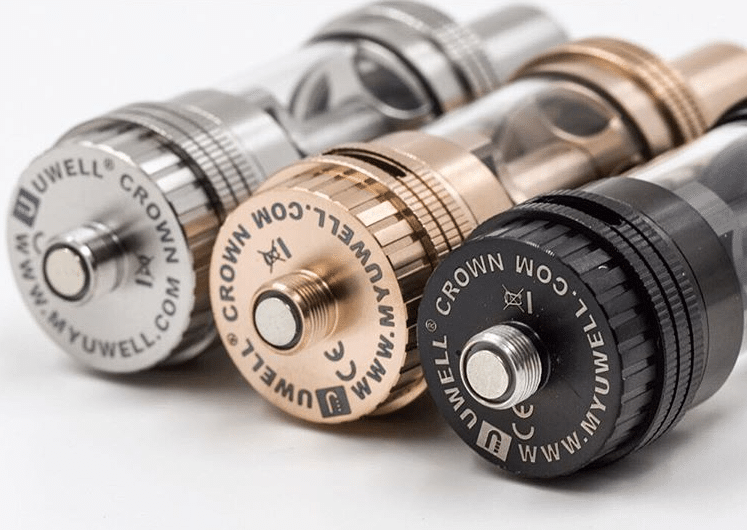 The Uwell Crown: Excellent craftsmanship and quality materials can always be associated with this clearomizer!

It contains nice airflow adjuster and dual airflow holes and, the tank has Quartz glass and a wide bore drip tip. Quartz Glass is even a better material, then the usual Pyrex. It has a higher melting threshold and doesn’t crack that easily.

When you turn the airflow dial, it clicks very lightly. You can twist the dial into the position, that you prefer, in an easy manner.

The tank can be fully disassembled and cleaned with absolute ease.

Many guys in the Vaping Community say: E-cigarettePROs is one of the most critical review page ever! And we earned this title over the years. But concerning the Uwell Crown we honestly have nothing.

The only thing, that is worth mentioning is the Design. The Uwell Crown looks just like any other tank. Non descriptive. Nothing special. But as we found out earlier. With the Uwell Crown is all about great flavor, massive vapor and the long lasting coils.

Like in any other of our reviews. We will present you nothing but the facts. Here is our Verdict:

First we wanted to find out, if the Uwell Crown by Shenzhen, was worth the huge Hype that has been building up around it. Currently the only other tank, that has comparable hype is: The SmokTFV8 Cloud Beast Tank.

Then we looked at the Pros of the Uwell Crown. And we found out. It is really worth the Hype! And the reason is threefold:

There are not enough superlatives to describe this tank. Some call it: The hottest, the greatest, even the beast and the monster… EcigarettePROs labels it: The Best Vape Tank. Period. So how would it feel having this [..] on your Mod?

BUT (!). After having tried it out serveral times and talking to the most experienced guys in the Vaping Community. Here is our short Uwell Crown 2 review: