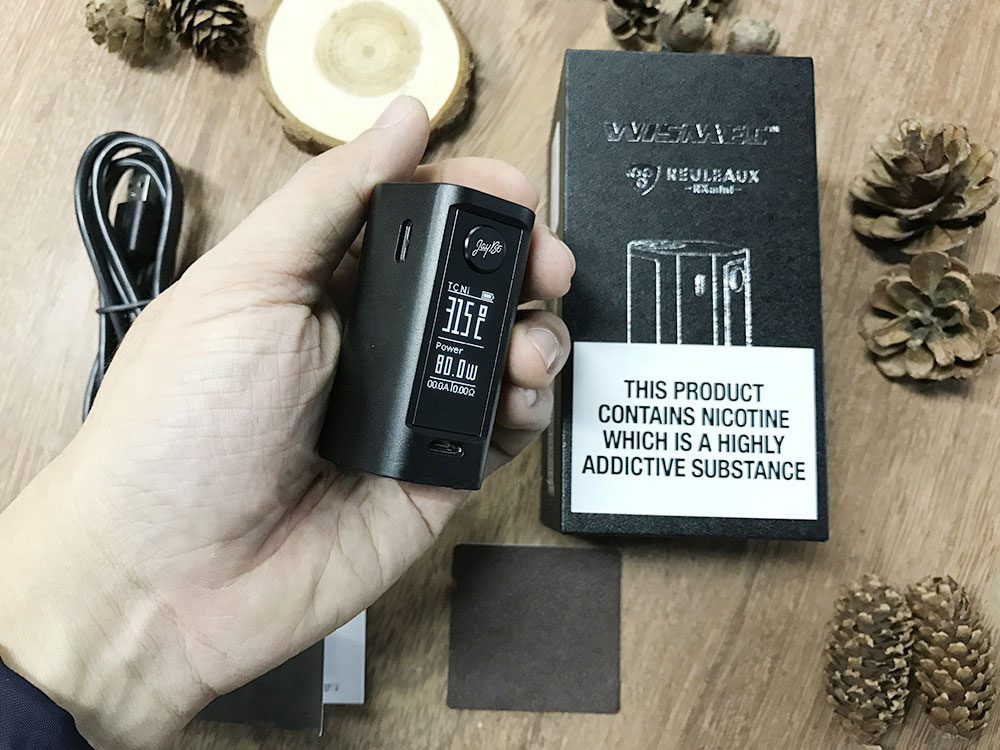 As the name suggests, the Wismec Reuleaux RX Mini is a smaller version in almost every aspect to the extremely popular and solid performing Reuleaux RX200. Wismec’s manufacturing and Jaybo’s design has proved a match made in heaven generally and the Reuleaux RX mini kit is certainly pleasing to the eye – but how does it vape?

Let’s take a closer look. I purchased the Reuleaux RX Mini Kit just to find out the mechanics of that thing. I had to look into the level of nicotine, as a heavy cigarette smoker I was adviced to go for the 18mg mix. I digress, here’s what you should expect.

In the box, everything is nicely packed away inside a functional box and the user manual is concise yet extremely well done. I received the grey and black version which included a swappable faux brown leather sticker to replace the black one on mine. I have to admit my throat was a little sore and from all the procrastinations of a real cigarette.

Inside the Wismec box you’ll find: 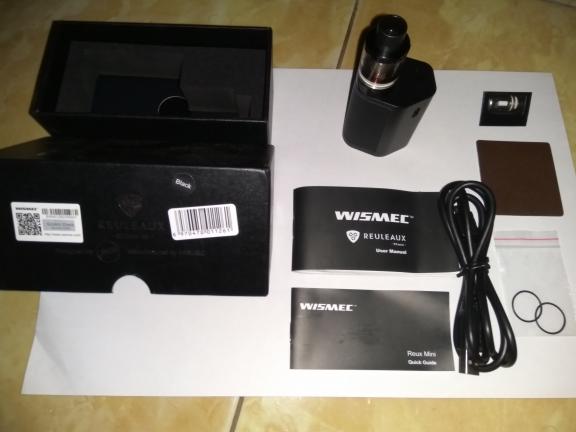 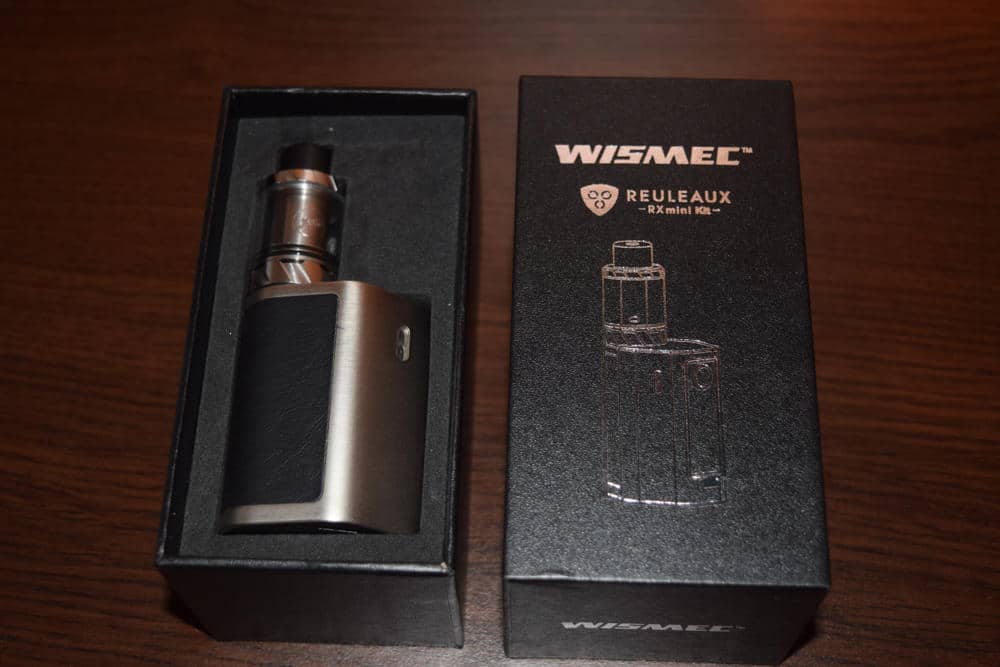 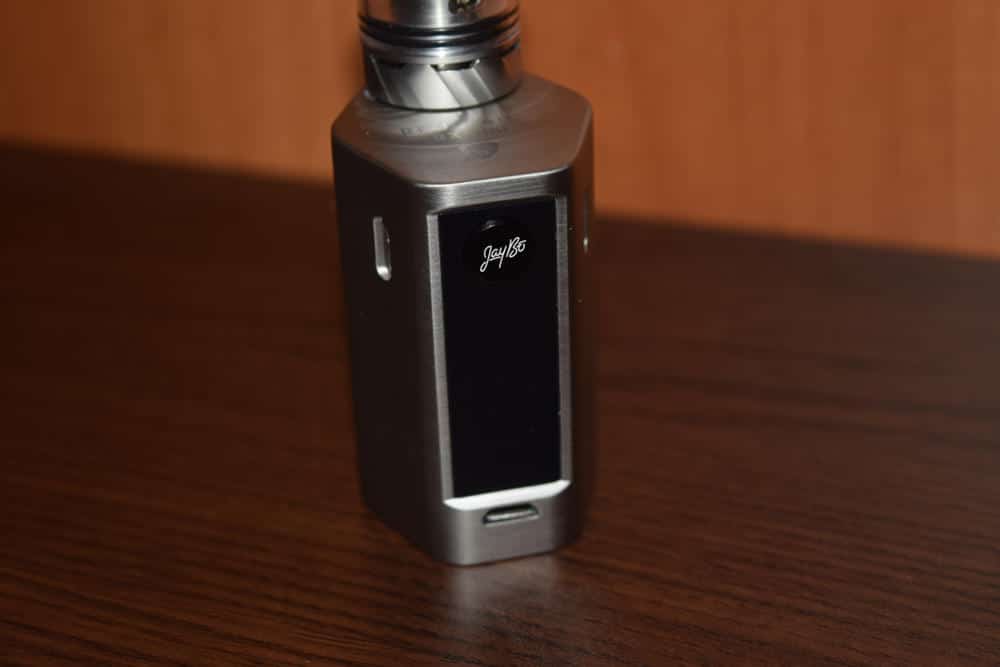 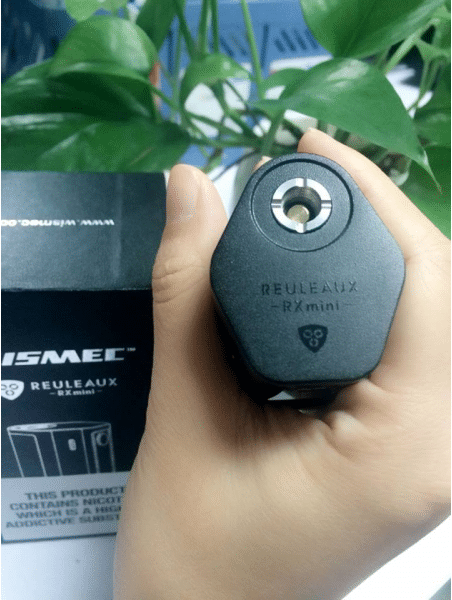 They’ve managed to pack a whole host of features into what is a pretty dinky – if a little chunky – vape mod. First up it’s capable of 80 watts of vaping power and in temperature control mode can run between 200 and 600F. After a trying the e-cigarettes, though it was not easy, the craving of a real cigarette is still strong bit I have to admit, unlike the real cigarette I don’t have to keepnit glued on my mouth all the time. Bit at least am able to resist the urge to smoke a real normal cigarette.

There are enough settings to keep even the most demanding vaper happy with VW, Bypass, TC-Ni, TC-Ti, TC-SS and TCR modes. It’s powered by an inbuilt 2100mAh battery and the firmware is upgrade-able.

There is of course the option to switch the leather grip colours via stickers but of more interest to experienced vapers will be the addition of a pre-heat function which you can adjust to get power to the coil that might need ramping up faster. The OLED screen pretty much fills the front on the mod and is bright and vivid. Just under that is the micro USB port [used for charging and upgrades] – and you can vape whilst charging. So where are the up and down buttons you may ask.

Its worth mentioning that whenever I drink coffee I get some strong craving of a real cigarette. The other day I was sitting at an airport and for some reason the urge grew so strong and after a couple of weeks abstaining from the cigarettes, smoking at this point would get me back to where I started, 25 cigarettes a day. It hasn’t been easy to abstain from smoking a real cigarette. Sometimes I just try my luck and ask friends coming over to come with a packet or two. In my mind I plan to use it as a justification but in the end, with a e-cigarette in my lips I stay strong.

They are on the base of the mod – more on that placement later. For those who like designer things you can also enter ‘logo mode’ and either download Wismecs or create your own – this mode can be turned on and off at will. I had a big problem once when I headed out for a walk after a bog argument on the phone. For the first time, I entered in a bar that did not allow e-cigarettes. The reason why surprised me, they say that it is meant to discourage the people who smoke normal cigarette. Smoke from the e-cigarettes would make the smokers think that it is okay to smoke inside the bar.

And for those not wanting to shine a vaping light wherever they go – full stealth mode can also be chosen.Wismec has built in a raft of safety features including overall protection of over-charging, over-current and over-discharging. Like I said – a ton of ‘stuff’ for a smallish device.

It’s a nice looking stainless steel – glass 2ml capacity tank with a simple screw off top fill. It has decent bottom airflow control that is hidden behind what I guess you could call a kind of ‘vanity’ ring. Good to see Wismec has included x2 0.2ohm x coils – one already installed.

The tank disassembles easily for cleaning and coil swapping is indeed almost ‘clean-hands ‘and is as simple as turning the tank upside down and removing it from the base – no need to drain your e-liquid! So after using the e-cigarettes for sometime now, its worth mentioning that I have had constant nose bleeds for the past 2 days. I am not sure whether its the airways cleaning up after a long time using the normal cigarette or a cold that I had. At this point I decided to cut off the rate of smoking the e-cigarettes. Besides that here is an inside look at the design and quality.

Since their emergence in 2004, the e-cigarettes have become popular among the cigarette smokers in the world. This is mostly because there have been awareness campaigns on the comparison of normal cigarette and e-cigarette. The majority of vapers who claim to have benefited from the e-cigarettes and stopped smoking still keep on smoking. The vaping rouses some concerns about it being a gateway to smoking. Some of the smokers use it for recreational purposes, again I digress 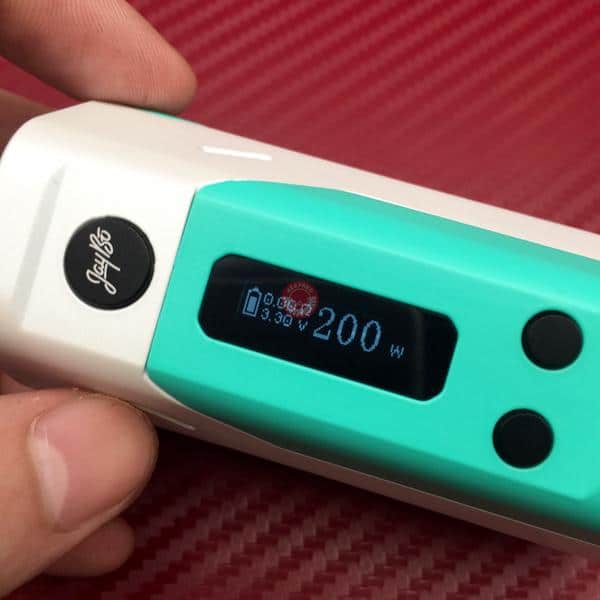 The build here is truly exceptional.The threads are silky – the tank is as pretty as a picture with funky and functional knurling/grips and the classy Jaybo signature etched into the chimney.The mod itself is indeed a smaller version of the Reuleaux RX200 and I have to say it does look bloody gorgeous.Having never held its big brother all I can say about this little baby version is it fits nicely in the hand and is a pleasure to hold – however and here’s why I wouldn’t class this as a nano/stealth mod – it is bloody heavy! It feels like a solid chunk of metal and weighs like one – I don’t have any scales but holding it with myCoolfire IV TC100 in the other hand it felt as if it outweighed it by quite a lot.

I’ve called it ‘chunky’ and indeed it is with the diamond/lozenge shape not fitting very comfortably in my jeans pocket and bulging in my jacket and coat pockets. I’ve likened it to a classy desktop paperweight that you can also vape on!

Have a look on Smok AL85 Review

The placement of the up and down [left and right] buttons on the base I have to say slightly annoyed me at first.I don’t bite my fingernails but I do keep them short and the recessed buttons can be a pain to press at times – but honestly? After a day I soon got the knack! Well, nicotine lozenges have never been enough to soothe my urge for cigarettes in the past, but when the e-cigarette heating element burnt out, I had to get something to soothe the urge. The heating element is supposedly not supposed to burn out until two months are over but I guess I have been smoking a lot especially the first week.

How Does the Reuleaux RX Mini Kit Perform? 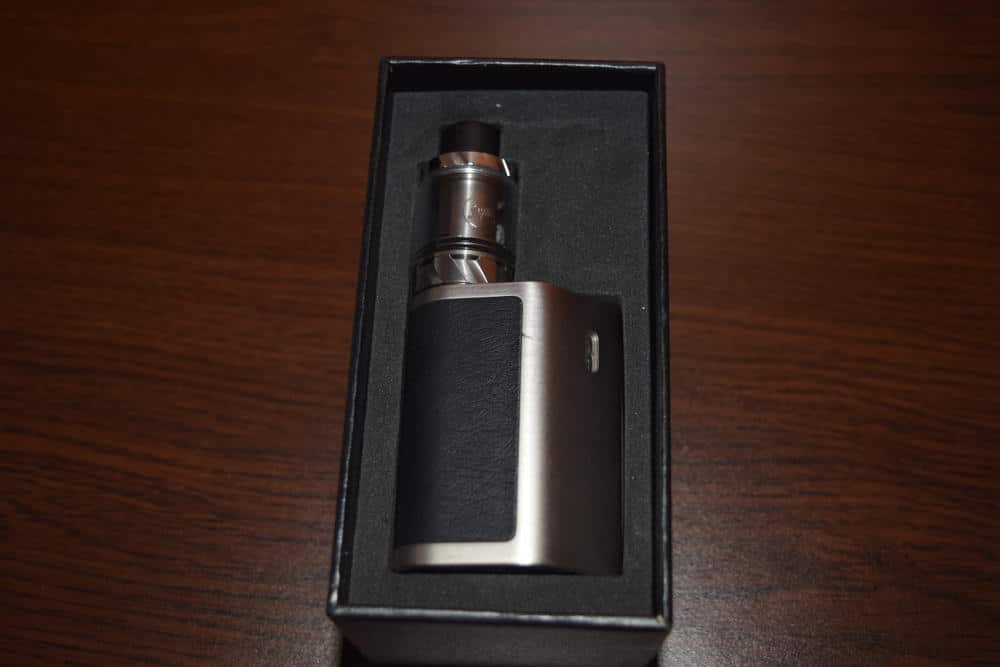 OK let me get this out the way first – nice mod shame about the tank. I haven’t used any of the Wismec Reux tanks so I have no idea how they perform. The little guy they’ve put with this is tiny and with the shrink down I have a feeling they’ve shrunk the taste factor too.

There’s no wattage edged on the coils so I guess it’s left to you to find the sweet spot. At 50 watts not much was happening flavour wise though cloudage was OK. After a lot of trial and error I got a taste [of sorts] around 65watts and clouds were good using an 80/20 e-liquid.

Don’t even bother trying these stock coils at 80watts – an instant dry hit and then burning [yuk!] despite a well filled tank and well broken in coils. However the device itself is a great vape. I slapped on a variety of tanks and drippers and this little guy [especially in pre-heat mode on new built coils] really does know its job and do the business.I tried it in temp mode on stainless steel coils and had no dry hits whatsoever.

Anyone who knows the Reuleaux boards will be pleased to know this is the exact same set-up. Once you get used to the up and down buttons being on the base and once you re-train your fingers lol – moving around the menu is delightfully easy.

* X5 on the power button on and off

* Press both buttons to lock the device

* Flip the screen – whilst device off press up and down button

* Choose TCR memory settings via up then down button when in

* Reset device via pinhole on base

There’s a ton of other features but the user manual will fill you in with those. 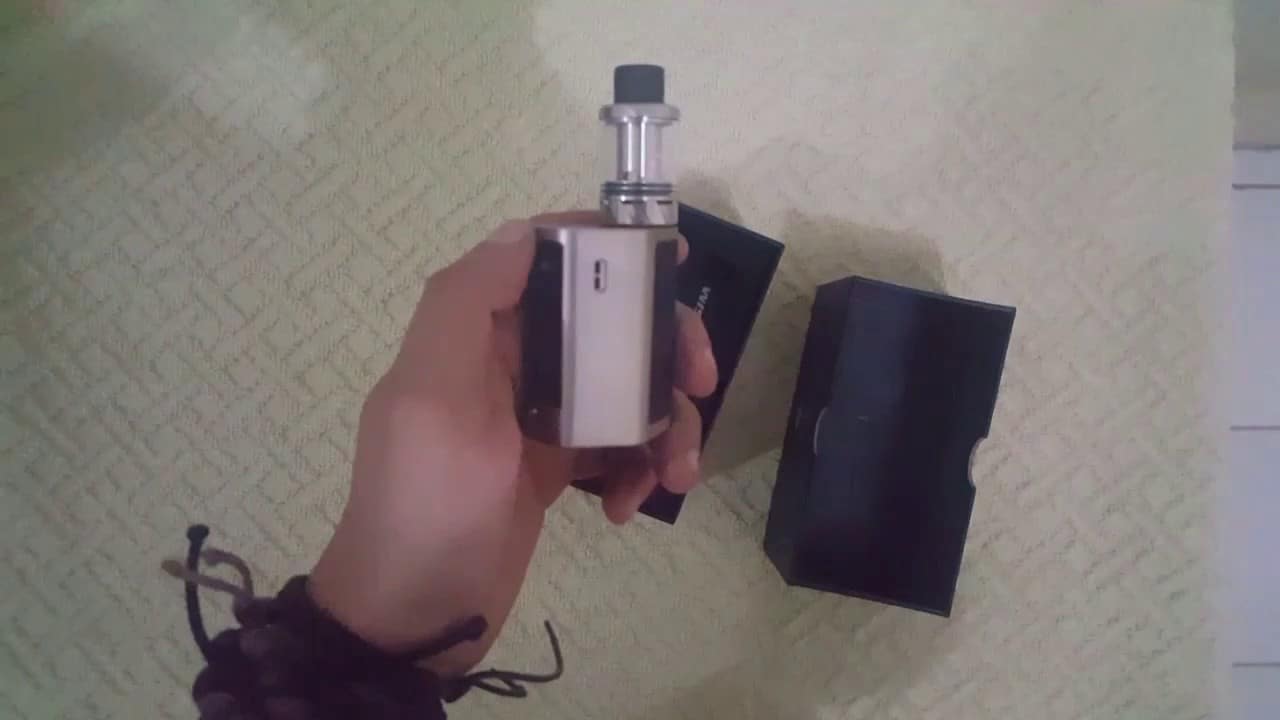 So after trying out the different e-cigarettes, and the extensive flavours of tobacco, such as raspberry, candy floss, blueberry, grape and many more, i have grown fond of them. I love the design of this kit – Jaybo certainly designs some good looking vape stuff.

The screen is wonderful – extremely crisp and clear. I found the menu extremely easy to manoeuvre around and all buttons were responsive and pleasantly clicky.The fact its firmware upgradeable and you can mess about with logos and faux leather stickers means you can personalize it somewhat. Powering up to 80watts means with the right tank or coils you’ll get a superb vape. I would also like to sum up the fact that my e-cigarette experience has had some effect in reducing my craving in the end. Unlike before I can go for a whole day without a craving.

Final Review Verdict take off the tank and you have a great little mod – if you don’t mind chunky and weighty.It really is an all singing all dancing little star and I love it. From its design to its jam packed features hidden behind a superb screen it’s a lovely piece of kit.Like I said – shame about the tank – but the mod can be bought as a stand-alone