FIRST IMPRESSION OUT OF THE BOX 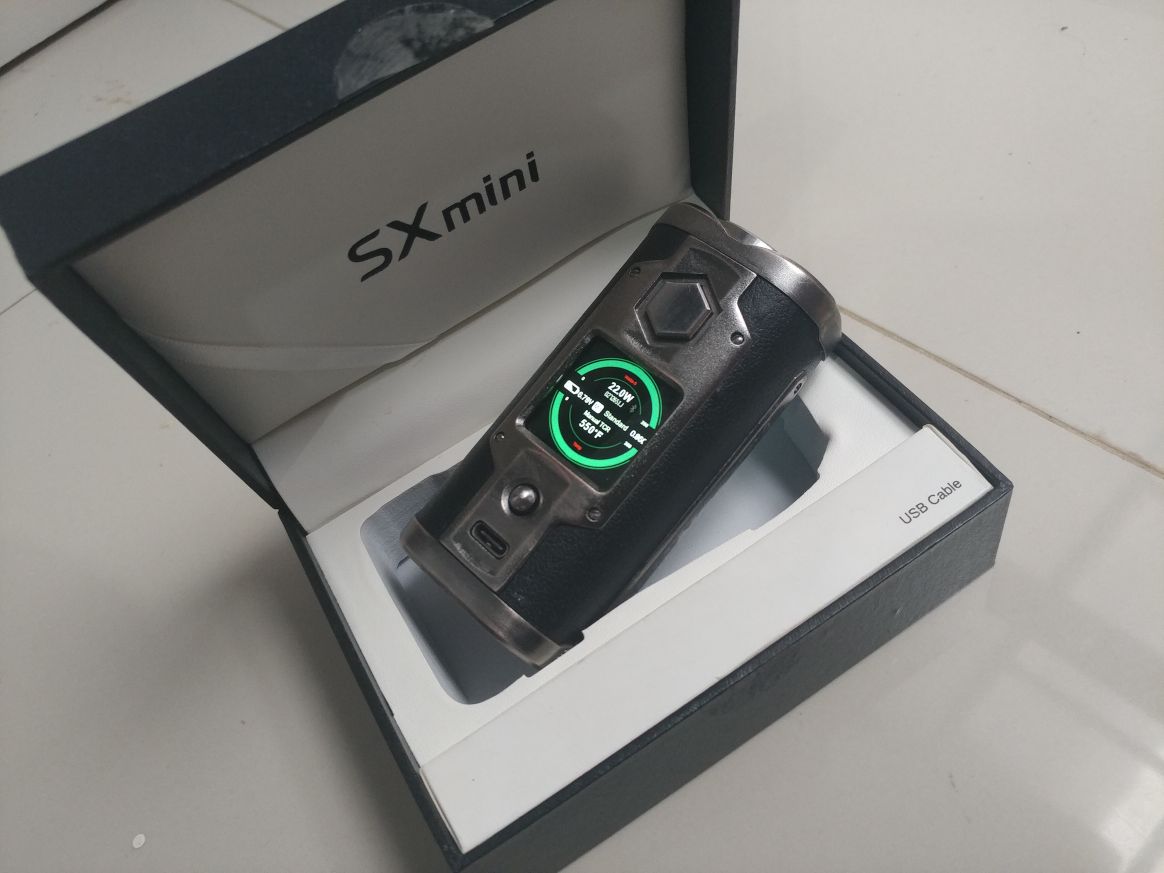 The packaging of the Yihi SX Mini G Class is quite simple yet very elegant. A sleeve which is frosted covers the box. Once you slide out the box and open it, you will be greeted with the most spectacular looking vaping mod. A wrap which is stretchy in nature and and somewhat shrinkable covers the mod and once you take off the covering, which is made of plastic, you will definitely agree with me that this mod is quite amazing when it comes to its outer appearance. It has a great feeling to it and the quality of the build of this mod just stands out from the very first touch. Amazing!

CONTENTS OF THE BOX

Once you open up the box, the following contents are packed inside:

APPEARANCE OF THE MOD FROM TOP TO BOTTOM 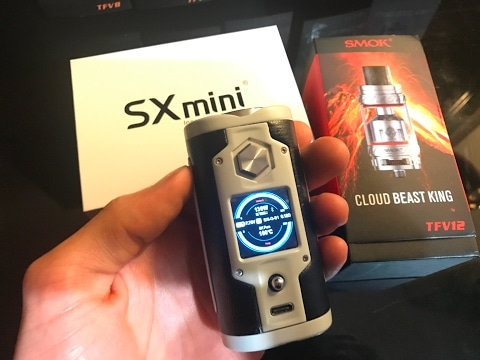 At the central part of the top of the mod you will be able to see probably the most solid 510 connection ever. The mod is milled out of non-rusting material that is stainless steel and has a smooth threading. The 510 is quite springy in nature and therefore very nice. This means that all the vaper’s atomizers will just sit flush.

Just in case a vaper is using those atomizers which still get their air supply from the bottom, the slots in this 510 are milled so as to cater for this need. There are two screws made of stainless steel whose main function is to help hold the platform in place very firmly.

Furthermore, the platform on its own is actually 31mm and so it can easily swallow up the atomizers, which are 30mm, without any problem whatsoever.

The mod has a fire button which is hexagonal in shape and does not really protrude from the mod’s body like in other some other vaping mods. This button is found on the front face of the vaping mod just above the screen, which is colored. The feel to the button is quite nice and on top of that, the throw is really short.

Personally, I would like it even better if the button was clickier and less mushy as well. On the bright side, the button is quite comfortable to use due to the fact that it is large and so very easy to find. Also, it can be either trigger finger or thumb fired. It has this great appearance which makes it look as though it has been made of stainless steel.

There is a beautiful screen just slightly below the fire button. The screen is not only huge but also colored, with a TFT (Thin Film Transistor) display. It is no doubt one of the best monitors I have ever seen out of all the vaping mods I have ever seen. This screen displays all pertinent information that any vaper would actually need and it does so in a vivid and bright fashion! The screen allows the vaper to be aware of the following:

Furthermore, it is also possible to adjust the screen’s brightness. This feature will definitely find favor in the eyes of vapers who have sensitive eyes that should not be exposed to the screen brightness. The Yihi SX Mini G Class also has wallpapers, thirty in total which are preset and therefore you can change the appearance of your screen background as much as you like. A person can also load any wall paper of their preference, which I shall cover later on in this review.

The yihi sx mini neither has the + button nor the – button. Instead, it has given us vapers a joystick. I have to admit that using the joystick requires quite a lot of getting used to. This is especially if a vaper has been using the + and – buttons throughout his vaping experience, just like me. Honestly, I am not really sure if I like it or dislike it. However, I absolutely love the fact that Yihi is trying to be more creative by adding completely new features to the mods.

The joystick on its own has a solid feeling to it and quite clicky so it gives me a sense of control. It protrudes from the mod’s body and a foam is inserted underneath it. The purpose of this foam is to make sure that the vaping juice does not get inside the joystick. Using the joystick is quite as easy task. All you have to do is press it either right, left, down, up or in. Each of these actions has a different function which I will talk about later on in this review.

The USB which is Type C has two main functions that is to charge and for upgrading purposes. That’s right! It is possible to upgrade the firmware once new ones have been released into the market by the company. The port is the new version of Type C which has the capability of accepting the cable on both of its sides. This is really great because it means vapers no longer have to flip cables over just so that they can ensure they have the correct side. It is possible to plug in the mod from any right end of your cable.

The mod has a battery door that is quite attractive. This door opens from right below the vaping mod through a little tab which performs the function of locking. Once the tab is slid with the user’s finger, the door pops right open. There are markings on the inside of the door which show the battery orientation of the mod. However, these markings are not quite clear.

How I wish they were brighter in colour because this would definitely make them even more visible to the human eye. The markings are black in colour and so when a user is in a low light situation, it is very difficult to see. There is a solid connection between the door and the 18650. It is also well constructed. On the outer part of the door there is a serial number and some branding. To my surprise there are no venting holes for the battery on neither the door nor the mod itself.

At the back side of the mod, which is opposite the screen, there is a logo of SX Mini which lights up. It looks amazing and not really distracting. However, I wish there was a way through which I could turn it off. I hope that this will get fixed in the next update.

GENERAL AESTHETICS OF THE SX MINI 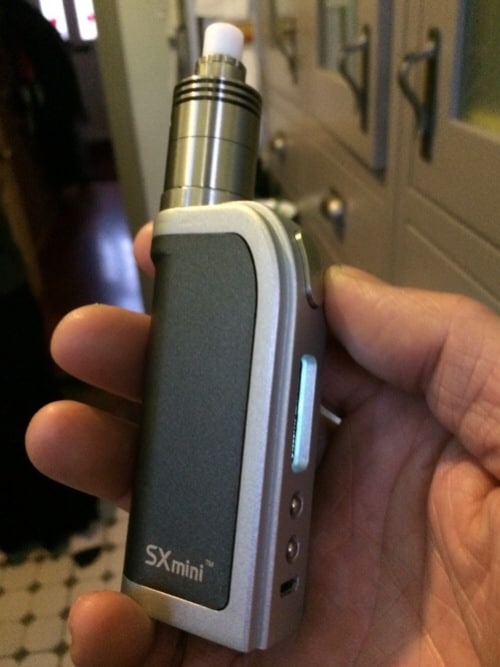 Generally, the mod feels great when I hold it in my hand. It has an oval shape which makes it comfortable to carry around. The G Class is also quite heavy in nature and this gives it that quality feel, while at the same time it maintains that compact look for an 18650 mod. It also has a texture that is rubbery in nature and the carbon fiber feel makes it absolutely comfortable too. The mod also has this silky touch and holding it just becomes pure joy.

It has a gunmetal grey sort of paint which in my opinion, looks to be of very high quality. On each side of the mod, there is a plate. One plate is written “powered by Yihi SX550J” while the other plate is written “G Class designed by ZJ Chen”. Considering the fact that this is a vaping mod which costs two hundred and twenty five dollars, I prefer that those plates should have put on the bottom because this somehow ruins the whole compact look of the mod.

Plate’s aside, the mod feels and even looks awesome. Personally I think that it is one of the most amazing looking mods which were mass produced. Every single piece is of really high quality. 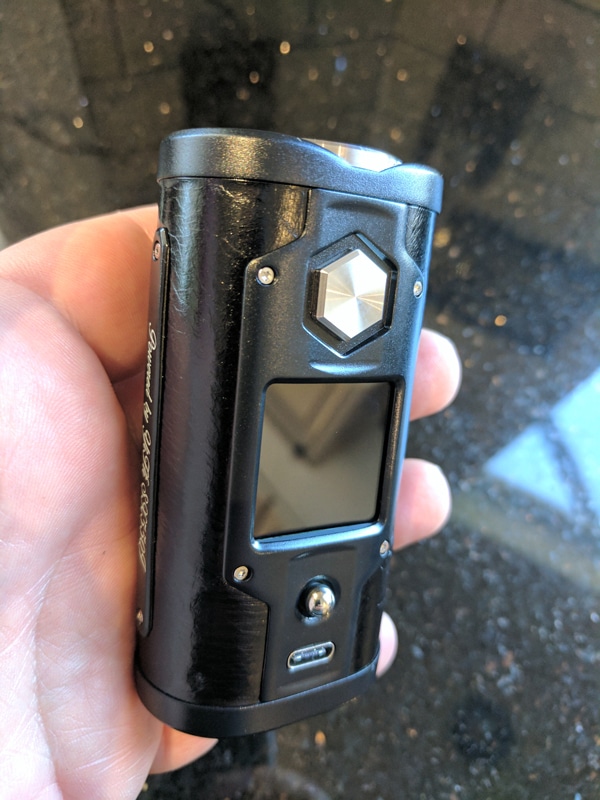 The board is absolutely incredible when it comes to the feature of temperature controlling. The wattage output stands at a maximum of 200 watts. It has the capability of firing down all the way to 0.5 ohms and even the range for the temperature control is between 212 to 572 degrees Fahrenheit.

The board can also fire TC wires including the Ni, SS and Ti. It also has the function of TCR just in case the vaper is using the more exotic coils. Furthermore, the mod has a couple of safety features which are in built within the board and they include: 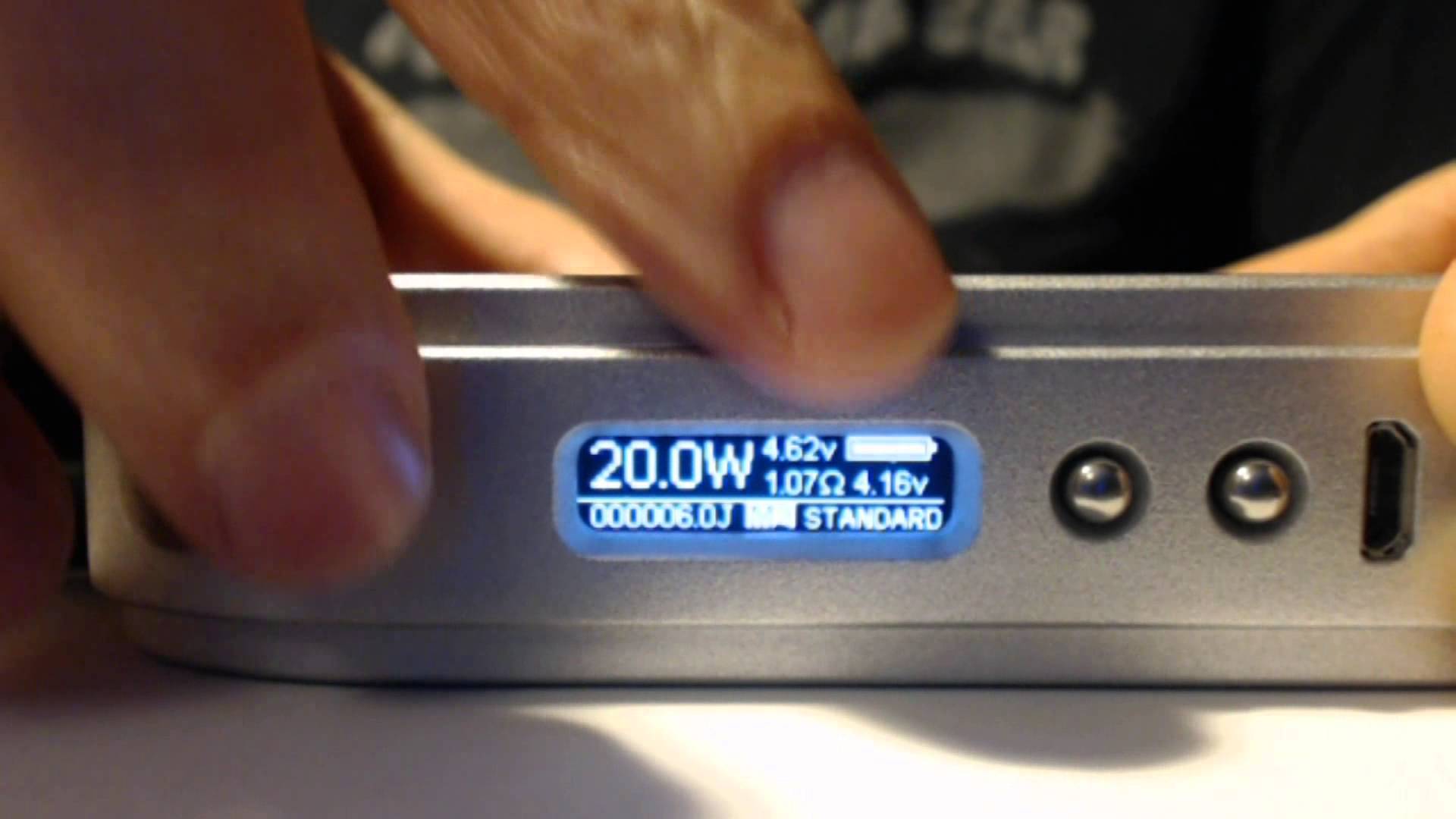 This menu system definitely requires getting used to because at first it appears to be somewhat complex and really complicated, even for people who have a long vamping experience. However, after I spent at least a day getting to understand how the menu works, the learning curve was not quite steep. Let us break down the menu system:

ON THE MAIN SCREEN 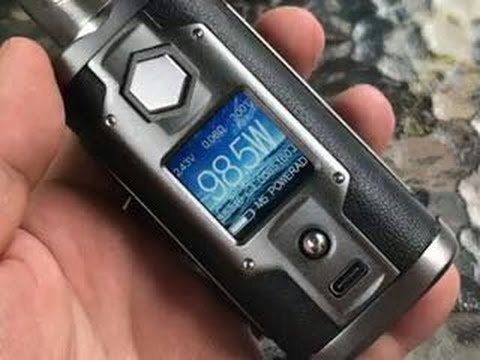 I really love the clock feature and it would be amazing if all vaping mods had one. If the fire button is clicked five times you will be taken to the main menu where you can now access all the other functions. The font function is actually quite nice. The only downer is that there are only two fonts available. However, the configure allows you to have up to five presets.

The other functions, those are the Bluetooth, wallpaper, standby time, adjust unit, language, brightness, select coil and time set are all self-explanatory. The display menu also allows you to flip your screen and adjust the temperature according to the surrounding.

HOW DOES IT VAPE? 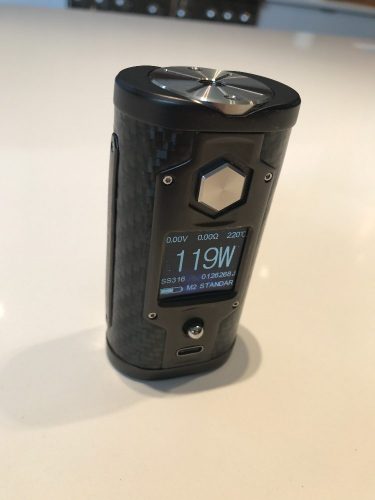 I have been using the Yihi SX Mini for quite a while now and it has definitely become my favorite mod by far. It is what I always go for out of my very big mod collection. It vapes amazingly in whatever mode. I would really love to tune the preheat to my own preference, but this vaping mod is really on point in the TC or power mode.

It is really accurate. I hope that in the near future the company Yihi can actually develop a board that can automatically read the resistance of my coil regardless of what mode I am vaping in. 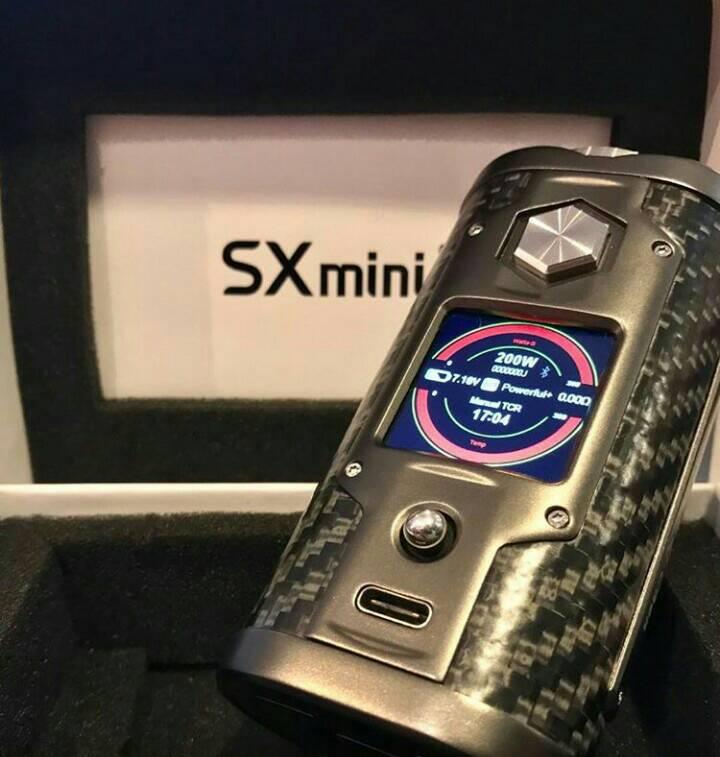 There is no doubt that the Yihi SX Mini G Class vaping mod is the finest mod which came about through the mass production. It exudes quality in all the aspects. Personally I think that the high purchase price is totally worth it. Can this vaping mod be used by everybody though? This totally depends on what mode the vaper vapes in. if you prefer to vape in the power mode, then buying the Yihi SX is really a total waste.

It is quite obvious that the Yihi SX is only for the vaper who takes their TC quite seriously. This piece is of very high quality and even surpasses the pas history of the SX Mini by far. If I was given a choice to use one vaping mod for the rest of my life, the Yihi SX Mini G Class would definitely be the one!