17Aug 2018 by Frederick Neff No Comments

Today we’re here reviewing the Saber Vape Pen, the latest in handheld cannabis vaporization technology compliments of NY Vape Shop. This slick little number is both small and discreet. It’s basically a sleek black cylinder with two detachable magnetic components and topped off with a glass mouthpiece. It’s about the same size as your everyday oil pen but with a more imposing weight and slight magnetic pull, courtesy of those aforementioned components. We’ll go in more details in this Saber Vape Pen review.

As a feature, this vape has strong magnetic connections where screw threads used to be. The mouthpiece, the heating chamber, and even the battery and charger are held together via strong magnets. There are three different heat levels and two separate heating chambers included, a quartz rod coil and a ceramic rod coil. These allow you to personalize your experience, tailoring each hit to both the wax and to your mouth.

Before we begin, let’s get into my “credentials” (as if you need credentials to review a vape pen… maybe what I need is a stoner verification card). You’re probably wondering, “why the hell should I care what this guy thinks about 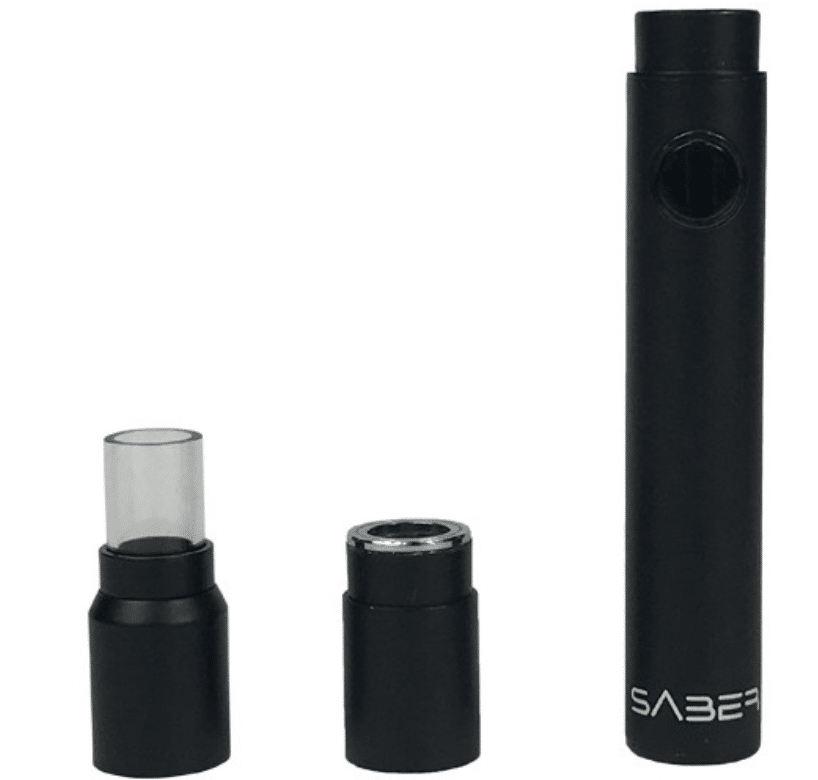 a vape pen?” Well, first of all, maybe you shouldn’t if you’re gonna bring that sassy attitude up in here. I’m all about that positivity baby. Anyway, there’s no one size fits all experience. I understand that what works for me may be inconvenient for you.  Just know that I’ve been smoking heavily for the past seven years. For three of these have exclusively done vaping, oil, flower, and wax.

So I provide a certain perspective colored by my own heavy use, but I believe that it also lends credibility to my review. The wants and needs of the stoner are pretty universal, and I’ve spent years exploring these base desires.

Of course, no review can substitute for an actual experience. In fact, even this review is just a facsimile of the huge rips I’ve been taking – a mere impression of the tokes I’ve smoked. But it’s better to spend five minutes reading and learning about the product than spending sixty dollars just to find out it was a miss.

So now let’s get into the product! This vape pen is wonderful for a multitude of reasons, not the least of which is the awesome heating system. However, it’s not exactly what i would consider to be the best vape pen.

There are three separate heat levels, which are both easy to access and easy to distinguish between. You press the button, the coils heat, activating the wax, which then converts to vapor that you breathe in. Like any oven, when you use a lower heat, 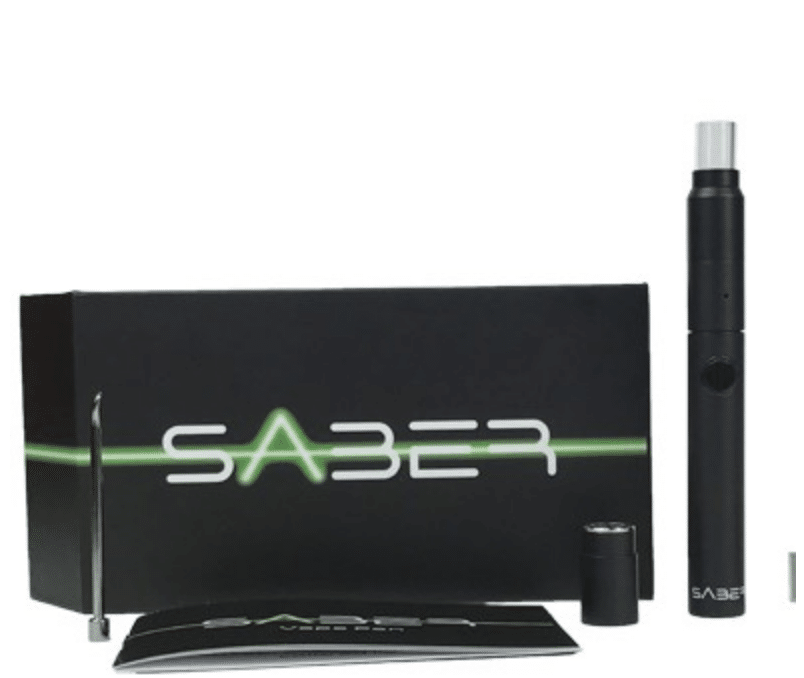 the product cooks slower, and, in the case of the Saber Vape, the wax burns for a smooth, tasty hit. I’m personally used to the heavy hitting action of the more primitive vapes. I found myself using the hottest heat most of the time, and taking huge, harsh rips.

When I would switch to the lowest heat, I would sometimes question if I was even hitting anything. However, minutes later I’d be high as fuck wondering if I should hit some more. It was nice and subtle.

The medium heat was my favorite, combining the silky smooth puffs with the massive pulls for a healthy, tasty vape rip.

There’s even an auto heat feature. You just double tap the button and it’ll heat automatically for ten seconds, allowing you to pull it all.

Something awesome about the vape was that I didn’t need to hit every bunch of wax that touched my coil. It was efficient and not wasting in this sense, I could save it for later – a flaw with many other vape pens. Something less awesome was that I didn’t feel as though the vape was burning everything cleanly. The wax residue was consistently piling up, making it more inconvenient to use. The suggested method to clean the chamber is to heat it up until everything melts off and then use a q-tip. I found that this worked very well and didn’t need another way method to clean it.

2 Heating Components, but It’s not ALL Good

Another perk of this pen is that two separate heating compartments are included – a quartz and a ceramic. I noticed that the quartz worked incredibly well, in fact, I still use the quartz to this day.

However, the ceramic oven seemed to quickly come apart. First, it burned the wax in such a way that seemed to damage the ceramic, or at least discolor it, and then the ceramic quickly fell off soon after. It’s hard for me to complain about this because I didn’t even realize ceramic heating chambers were a thing. I didn’t even realize I would be getting one with the product, but it’s a definite mark against Saber for providing such a faulty component. It’s part of what you pay for, yet you won’t be receiving your money’s worth in this department. My advice is to be gentle with this piece and clean it often perhaps. Not much more I can say about this because mine broke.

Best Way to Use The Saber Vape Pen for Wax

This pen is made for wax and crumble and shatter and concentrates in general, so don’t put flower or oil in this, cause that will just fuck up the inner workings. I’ve found that the best way to use it is to dab a big ol’ dab on your dabber and then stick that bad boy on the quartz coil. Close up the piece and just hit to your heart’s content!

I personally have an oral fixation or something, and I love 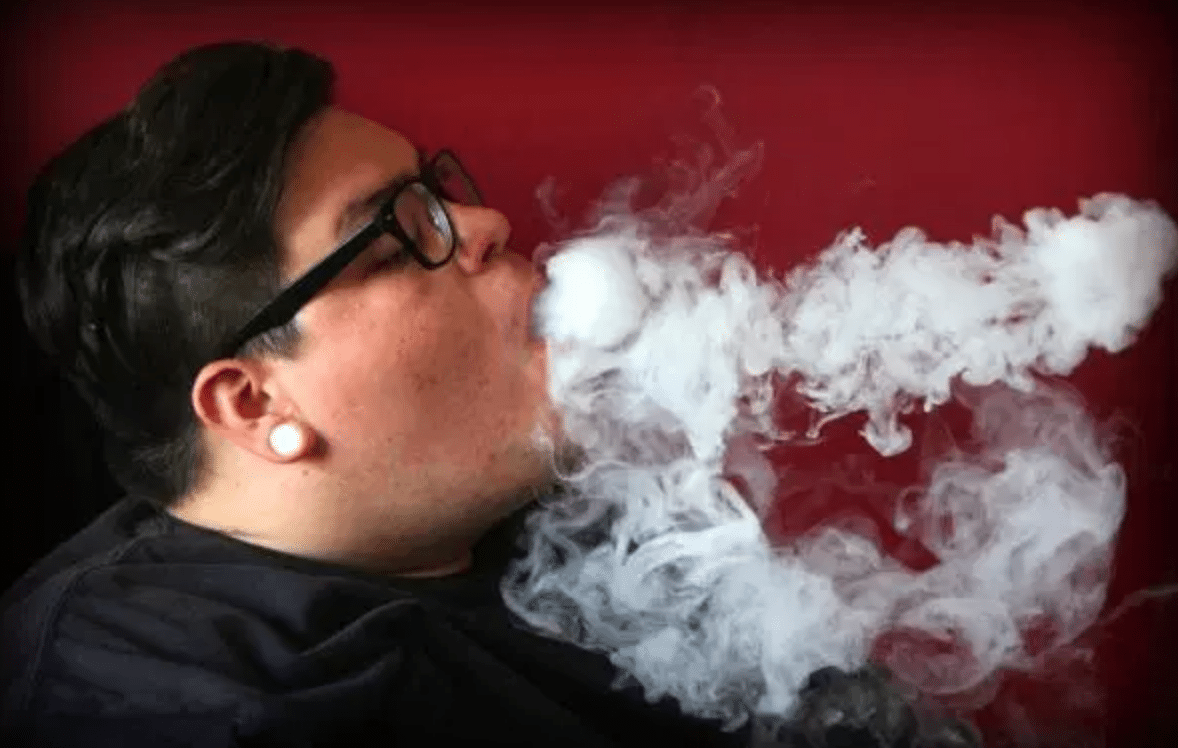 the process of smoking/vaping and this pen gave me what I needed. I could hit constantly and consistently while getting really high and not wasting too much wax.

However, I would suggest using it more sparingly… like a hit every couple of hours or so. No reason to hit it constantly because you can really only get so high. However, if you’re like me and you just wanna see those vapor clouds… turn the heat up to red (high) and take those rips! I treated it almost like a bong with an oil rig set up, just hitting it at my desk while I did other things.

That’s another aspect that is so great about vape pens: the convenience and the discretion. Moreso the convenience, because it can be a little hard to be discreet. You’re pulling wax out of your pocket and dabbing it into a vape pen, but it’s pretty discreet too aside from that. If you load up the pen with a huge dab before you leave the house, you can bring it out and hit it. Aside from the slight aroma of cannabis in the air, no one would be the wiser.

All in all, if you are a heavy user and you enjoy vaping concentrates, this is really the perfect vape pen for you. It’s sleek, it’s convenient, and above all, it provides a great smoking experience. The wax is consistently heated and vaporized and provides a solid high time after time after time. I would recommend it to anyone who is looking for a vape for concentrates.