Vaping is a relatively new trend. Unlike the traditional cigarette smoking vaping uses an e-cigarette or e-cig that is as pleasurable as cigarette smoking but less harmful. With its growing popularity companies are introducing new and innovative e-cig and vaporizer models to make the experience more pleasurable. A popular name to remember when we talk about e-cigarettes is Smoktech.com.

With its state-of-the-art designs, Smoktech.com has taken the vaping experience to a whole new level. Founded in 2010, the company has climbed the ladder of success in a relatively short time. Being the pioneer in using dual coils and introducing Bluetooth technology in your vaporizer devices the company has really set a standard for other companies to follow. 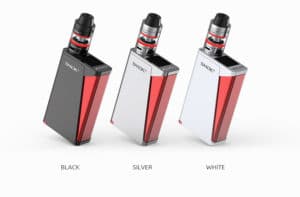 Located in Shenzhen, China the company is a leading brand introduced by the Shenzhen IVPS Technology Corporation PVT. It is one of the most succeeding vaping companies from China. One thing that sets SMOK apart from other vaping companies is the ability of Smoktech.com to come up with original and new products. When other companies were busy copying successful prototypes SMOK came up with designs like Magneto and Telescope. The company showed the world and not just the Chinese companies how important it is to introduce new designs for customer satisfaction.

This brand has never been afraid of experimenting. The company introduced dual coils at a time when the use of dual coils was not so common and was considered intrepid. Yet the company took the step and introduced its users to a new level of vapor and flavor experience. TFV4 is the most popular prototype from the company which is referred to as the “big clouds” by the enthusiast vapors. Tumbler tanks and Pyrex ARO were introduced in 2013 that used the SMOK’s latest “cotton less” technology. These new designs used uncommon bottom coil designs to help users avoid dry puffs. BEC Pro was announced with the 2014 lineup and was the first device by the company to make use of Bluetooth technology.

The company continues to flourish in the year of 2016. With the rise of the New Year, it has introduced several new products. TR-RTA is a vaping device with rebuildable space. TFV8, H-Prive and Alien Starter kit and are all new additions to SMOK’s 2016 catalog.

SMOK’s success is an example of the importance of originality in a business. When many vaping companies were competing in copying designs Smoktech.com never hesitated to take chances. This is the reason that made this brand what it is today.